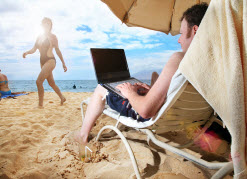 One of the key benefits of having your own online business is supposed to be location independence.

In the extreme it’s the notion of sitting on the beach and having an “F5 refresh” party watching the money rolling into your bank account.

Of course, this is far from reality:

1. Most web business owners either work from home (as I have done since late 2010) or have their own office that they work from.

2. In order to sit back and watch the money roll in, you’ve got to put in a lot of time and effort first (funny how some people forget this isn’t it?!)

Now, this said, during my time online I have run my business from remote locations. I’ve sat in hotel bars and reception areas with my laptop and a coffee making quite a bit of money in locations including New York, Miami, Amsterdam, Barcelona and Montpellier.

However, I could only do that because I’d put the work in first before I jetted off!

In general though, for 90%+ of the time I work from my home office here in London. I like it here, my commute is around 10 seconds and I know that I can work whatever hours I choose.

Having said this, towards the end of last year I did start thinking that I am somewhat tied to my desk not least because all my files are on my main desktop computer.

This meant that if I went away working can become a little tricky: I forgot to bring that file I need, I didn’t remember the password for this site, where are my notes that I made last week?

Small stuff, but if you’ve ever tried it you’ll know it can REALLY slow you down!

Moving To The Cloud

“The Cloud” means all the computing resources you need being stored remotely on other computers and delivered over the internet.

For example, instead of storing a written article in Word on your computer’s desktop, with cloud computing you might store that article in Google Drive which means you can access it anywhere in the World (as long as you have internet access of course!).

So this is what I’ve been transitioning to over the last 2-3 months.

Here’s my basic set up:

1. Dropbox
This is a brilliant service which is also free.

At a very simple level this means I can put a file into my dropbox folder and then access it if I’m downstairs on my laptop watching TV or away for the weekend in a hotel.

I now store all my niche research, product development files and my TODO list. The last of these is really important on a day to day basis because wherever I am I can open my TODO list, which I keep as a simple text file, and carry on working through my tasks exactly where I left off.

2. LastPass
I LOVE this!

It’s a free piece of software that remembers all of your passwords (I have dozens). I won’t say too much more about this as we looked at it in this previous post, other than to say if you aren’t using it you are missing out in a big way!

3. Google Drive
Personally, prefer Dropbox to Google Drive but it’s still well worth investigating. It works in a similar way and I still use it a little bit, specifically for running surveys as I demonstrated here.

4. Amazon S3
I use this for storing my product and marketing files. So when someone plays a video it’s streamed quickly and efficiently direct from my S3 account.

It’s also incredibly cheap – I think the biggest bill I ever got way around $40 for a month and that was during a product launch where thousands of people streamed my videos. GHG members can see exactly how it works in this session.

So Go On, Start Moving To The Cloud!

These are the tools I use and of course there are literally hundreds of others.

But the main point I wanted to get across is that it’s a great idea for you to move to the Cloud. You don’t have to do it all at once. To start with just get going with LastPass, then start using DropBox and so on. The more you do it the more you’ll get addicted, it really is such a time saver!

Agree/Disagree? Do you use any other tools which others might find useful? Please like/tweet and drop your thoughts below 🙂